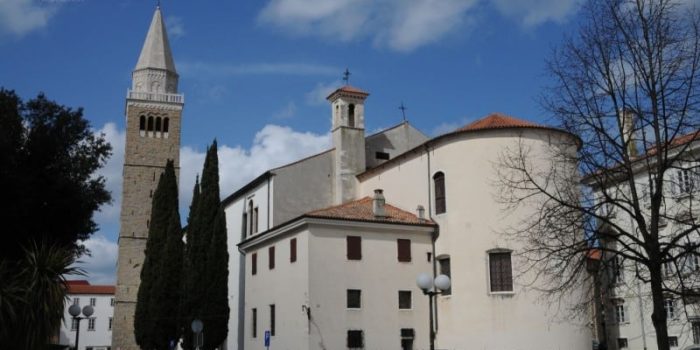 The Cathedral of Koper (EN)

THE CATHEDRAL OF KOPER

The beginnings of Koper episcopate, as far as it is known, reach down to the first half of the 6th century. In the chronicles relative to that time. St. Nazario (524) as the first bishop is mentioned and he is said to be born somewhere in the vicinity of Koper. St. Nazario is at the same time the patron of Koper town. The Cathedral itself is, however, consecrated to the Assumption. Some of the historians pretend that the Koper episcopate was established in the 8th century under bishop Janez I. (756) /Kos, Gradivo, 230/, but others pretend that happening not later in 12th century (Bibliotheca Sanctorum, Vol. IX, Rome, 1967). One of the most distinguished bishops of Koper, was Paolo Naldini (1686 – 1713), who, in 1700, published the history of his episcopate (Corographia Ecclesiastica, Venice 1700).

According to the tradition, the present Cathedral of Koper is the fifth, and after some sources even the sixth church in the same place. The present size and shape of the Cathedral dates from the middle of the 18th century.

The present Cathedral is 210 feet long and 75 feet wide; inner length of the nave is 120 feet, and broadness, however, 72 feet. Under the present presbytery in former church there was a crypt – underground chapel – with the altar of St. Elijah and there were stairs leading to the crypt from the right and left side of the high altar. The crypt was destroyed and filled up with earth when the Cathedral was under reconstruction in 1716.

The Cathedral belfry is owned by municipality of Koper. It is 160 feet high and was built in more stages and, as far as it is known, several times reconstructed. Originally it was a stronghold and a watch-tower intended mainly for military purposes. It was joined to the Cathedral in 1488 and got the present form in 1664.

The most interesting detail of the Cathedral of Koper is, nevertheless, the Baptistery, the building separated from the Cathedral. The Chapel – Church of Carmelite Holy Virgin is a rotunda standing to the northern part of the Cathedral and belongs to the oldest buildings in Koper (13th century).

In Koper there have been at that time, besides the Cathedral, of course, over 50 larger and smaller churches and chapels. Many of them belonged to the various orders, fraternities and private persons, but a certain number of them was abolished under the rule of emperor Joseph II. as well as in the time of French occupation.

Under the Parochial administration of Koper are the following churches: St. Blase in Dellavalle Street, St. Basso in Preseren Square, St. Nicholas in Kidric Street, former Capucin church of St. Martha in Goriska Street and Franciscan church of St. Anne in Destradi Square. The later is administrated by Franciscans from Strunjan. In Semedela (near Slavnik workshops) there is a legacy – church of Holy Virgin, where regular divine service has been held.

ALTARS IN THE CATHEDRAL OF KOPER

The high altar, since 1968 (designed originally by architect Tomaz Strukelj) has been reconstructed and faced the believers according to the instructions of 2nd Vatican Council, was built by Piran artisan Gaspar Albertini in 1789. Behind the seats along the high altar there is a sarcophagus with cut in inscriptions. The altar of St. Peter and St. Paul was brought from the abolished church of St. Dominic in 1806. It is decorated with painting, the master work of Koper painter Bartolomeo Gianelli (1824 – 1894). The altar of Immaculate with painting of the same master painter Gianelli. He painted it in a hurry of the request of Koper Chapter House, who wanted to have an occasional painting for the time of solemn proclamation of immaculate Conception dogma of December 8th, 1854. The altar of St. Hieronimus (1670), a work of Venetian sculptor Alessandro Tremignan. The altar of Holy Cross was built in 1894 by the sculptor Scipione Biggi Carrara as a present to the Cathedral of retired Koper prebendary Abato Schiavi for whom the same sculptor carved the sepulchre, as well.

OTHER POINTS OF INTEREST IN THE CATHEDRAL OF KOPER

The pulpit (1758) – made by Lorenzo Farolli in rococo style. By the same sculptor was carved, as well, the pillar with statue of Charles VI. standing in Piazza della Borsa in Trieste.

Bishop’s Throne – of wood, wonderfully carved with artistically made high back hand rails. The throne is entirely gold-plated. Made about the year 1730.

Choir Pews – of olive – tree wood made by “Mister Stefano Bandesi Tedesco” in year 1686-1687. Coat-of-arms of the bishop Agostini Briti who bore the costs. From the same period is the big legile (book-stand) in the choir place.

Organ – from the year 1773 (prof. Gaetano Callido, Venice). The former organ was destroyed by lighting in 1771.

Fanali, big wood carved and gold plated chandeliers (closed) are a Venetian work (Paolo de Mori 1750) as the majority of other chandeliers in the Cathedral.